5 Tips To Get Your Teen To Bed On Time! 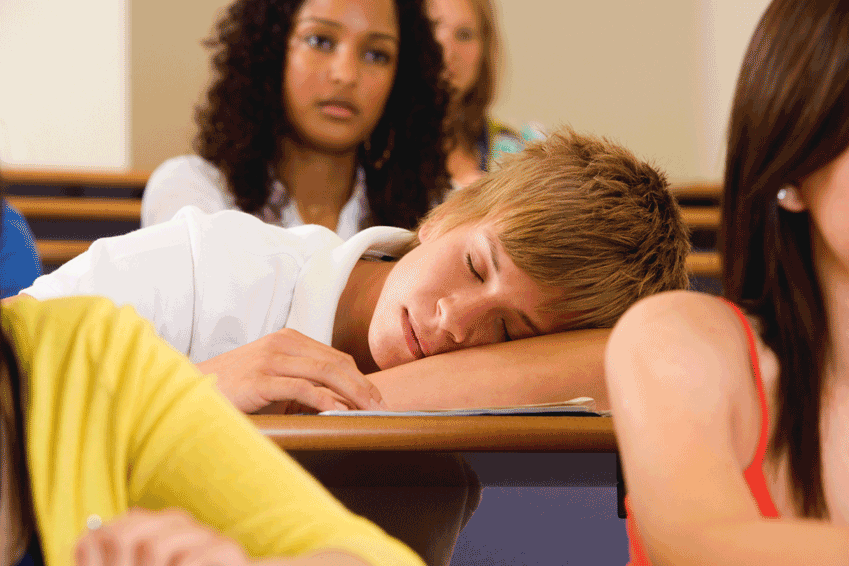 Is your teen getting enough sleep? Chances are, not, and that’s dangerous. Here are some things parents can do to help the situation.

It is common knowledge that getting enough sleep is one of the most important things people can do for themselves. Lack of sleep opens up a can of worms as far as our health and mental well-being are concerned.

Why teens are special

Teens are “blessed” with a number of unique characteristics that promote poor sleeping habits.

A teen’s internal clocks, called circadian rhythms, shift slightly during the time they go through puberty. Melatonin, a hormone that helps us grow sleepy, doesn’t kick in until significantly later in the evening than in adults or children. Additionally, sleep is naturally harder to come by in teens than in younger children, even if they are tired!

In addition to their innate physiology, most teen are obsessed with electronic devices, and it has been proven that the light from phone, tablet and computer screens can interfere with the brain’s melatonin production. The addictive, mind-stimulating nature of texting, Facebooking, surfing and gaming keeps teens awake, even when the screen is put away for the night.

Finally, we now know that teen brains are not fully developed, and decision making can be severely hampered by a lack of sleep, leading to poor social decisions and wreckless driving.

The toll lack of sleep takes on teens

The fact is, teens need at least eight hours of sleep per night, according to most experts – in many cases, ten is really the number – and generally speaking, teens are not getting the sleep they need.

The result? According to a poll taken by the National Sleep Foundation…

Teens with high scores were more likely to take longer to fall asleep on school nights, get an insufficient amount of sleep, and have problems related to sleepiness. In the poll, 73% of teens reporting unhappiness, sadness, or depression also reported not getting enough sleep, and being excessively sleepy during the daytime hours.

It is, in effect, a vicious cycle, where lack of sleep feeds melancholia and melancholia prevents sleep.

What Parents Can Do

Your teen may be a “free agent”, but it is important to monitor the sleep schedule. Here are five things you can try…

1. Look for sleep disorders in your teen.

Conditions such as sleep apnea can go undetected or treated for years, causing undue sleep deprivation. Make sure you review the signs and symptoms of sleep apnea, such as snoring, and get help. Many dentists and orthodontists are now a great starting point for seeking help.

It’s a tough thing to do, but you may want to demand that devices be placed in a basket in a common area after, say, 9:30, to give your teen a chance to start unwinding. If need be, volunteer your own device, to show it’s not personal.

If your teen seems overwhelmed by schoolwork, sports and other activities (in addition to goofing around on social media, etc.) it is advisable to teach the art of time management. If a specific activity needs to be dropped, so be it.

It is acknowledged by many communities and health care professionals that schools often start too early for teens to get a good night’s sleep. If it is impossible to change that in your area, work backward from the time school starts, and help your teen shape a rigid schedule that will afford him or her enough sleep.

Sports drinks, soda, and caffeine-infused drinks supply an addictive, eye-opening drug that often fails to wear off before bedtime. Encourage your child to break the habit. Carb and sugar loaded foods before bed will also prevent sleep – make sure meals are served way before sleeptime.

As parents, it is often our own fear of rejection and lack of control that prevents better our teens from changing their habits for the better. Test the waters, and see if you can make a difference in the life of your child, for now and for years to come.